Burrowing Owls: What Property Owners Should Know About Them 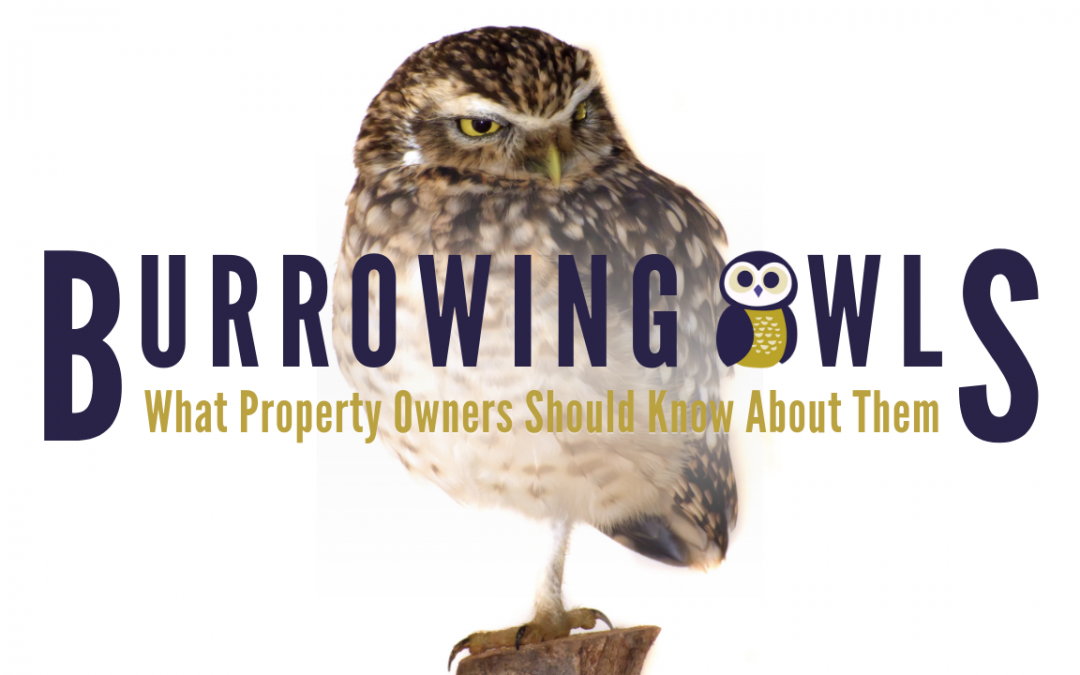 Burrowing owls are not only the official city bird of Cape Coral—they’re considered a threatened species and are protected under the Federal Migratory Bird Treaty Act. Because of their protected status, many Cape Coral residents have differing opinions about one of the smallest owls in the world. On the one hand, they are adorably tiny, non-aggressive, and eat pests like cockroaches, snakes, and rodents. On the other, the presence of these cute little buggers can complicate things for property owners if the birds have decided to take up residence on a piece of Cape Coral property.

Contrary to popular belief, construction can still take place on a property with burrowing owls in residence. There are just a few guidelines that have to be followed or—in a worst case scenario—a special removal permit to be obtained from the Florida Fish and Wildlife Conservation Commission (FWC).

First, a site inspection must be conducted to determine the exact locations of any owl burrows on the property and any surrounding vacant properties, and a burrowing owl/gopher tortoise affidavit must be submitted in order to obtain building permits. So long as your construction plans don’t disturb the area within a 10 foot (33 feet during nesting season) radius around the nest, you have the blessing of the FWC to move forward with your project, so long as you properly mark or rope off the area to avoid having construction equipment encroach on the designated burrow area.

However, it can be problematic if the owls decided to settle down smack dab in the middle of the lot—you can only move a building so far before it ends up on the neighbor’s property. In special cases like these where there’s just no feasible workaround, a nest removal permit can be issued by the FWC, though it can take six to eight weeks to obtain. However, even with an approved permit, the nest cannot be destroyed during nesting season, which runs from February 14th to July 10th. Essentially, you’ll have to plan your construction project around that time period, even if the nest is uninhabited.

If a burrow is destroyed legally in order to make way for a construction project, it’s strongly encouraged to create a new ‘starter burrow’ elsewhere on the property. And let’s be real; once construction is complete, who wouldn’t want to have those feathery little faces pop out to greet them every once in a while?

At Title Junction we care about helping you stay informed throughout your real estate transaction. Have questions? Give us a call at 239.415.6574.

Instant Title Quote
Launch App ...or Contact Us for a Custom Quote